As for why, look no further than one of the top retailers in the world. In 2019 Amazon announced it ordered 100,000 electric vans from Rivian as part of a $440 million investment into the startup automaker. Amazon’s importance to Rivian goes well beyond that: Prior to Rivian’s IPO, Amazon owned 20% of the electric truck maker.

Those vans headed out on the road to start making Prime deliveries in 2021. It’s just the beginning of a big B2B arm of Rivian’s future business.

We sat down with John Woodmore, senior director for commercial vehicle product lines at Rivian, to discuss the automaker’s electric delivery vans, known as the EDV, how it all came together, and the future expansion of the lineup both in terms of hardware and possible software. Here’s what we learned. 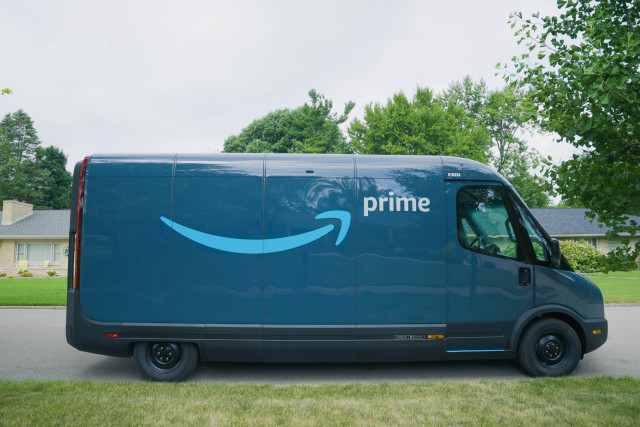 There will be at least three van variants

At present all EDVs that have been delivered to Amazon have been the EDV700 model, which is the longer, larger, of the two initial models. An EDV500 is currently in testing and will roll out in Q1 2023. The third model Woodmore was willing to confirm is an EDV900, but that’s a larger product he wouldn’t discuss much.

Each model name refers to the van’s nominal cubic capacity for hauling cargo.

The EDV700, which is the current van rolling around delivering Amazon packages, looks nearly identical to that of the upcoming EDV500. A keen eye will spot the differences. The longer EV700 features four panels on the side while the EDV500 will only have three with the middle panel becoming one large piece of metal. The 500 will be seven inches narrower and 14 inches shorter, as well as lighter.

Rivian isn’t talking curb weight of either van, but Woodmore told Green Car Reports the weight difference between the 500 and 700 model will be more than 400 pounds.

Light on details and quick to move on, Woodmore would only say the EDV900 introduction “is in the future.” Rivian’s still working through when the right point is to introduce that with Amazon. Details are still being worked out for this model. 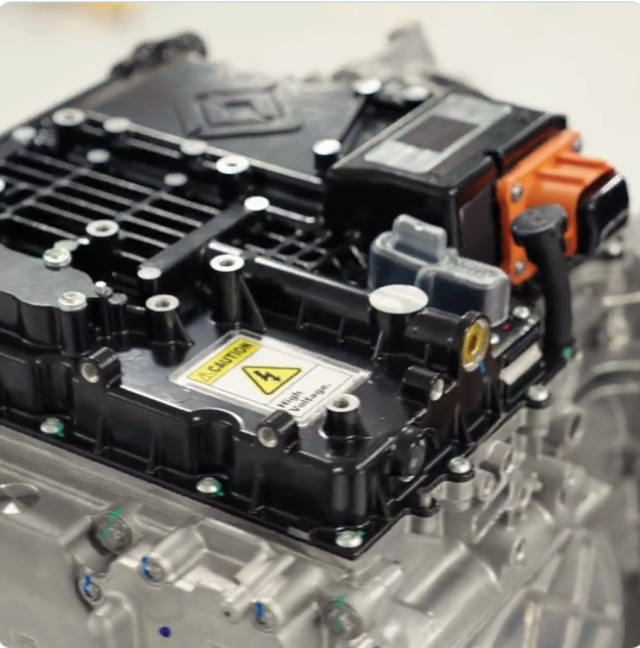 Currently every EDV700 delivered is powered by the two Bosch-made drive units found on the R1T electric truck’s front axle along with the same 135-kw battery pack.

Rivian won’t talk power output. Woodmore noted the power output is derated to “something that’s more adequate for a commercial vehicle.” In the R1T, the front axle-mounted motors are rated at 415 hp and 413 lb-ft of torque.

That 135-kwh battery pack is using the same NCA chemistry and small 2170-format Samsung SDI cylindrical cells as the R1T.

Rivian-developed and built motors, part of new modular drive units the company has been previewing, are currently under development and will come online by the end of Q1, according to Woodmore.

With the introduction of the new Rivian-built motors the EDVs will move to a single-motor design with the new motor still powering the front axle. This move will pair with Rivian’s new LFP battery pack chemistry, which is also going into the R1T electric truck and R1S electric SUV with the dual-motor models in mid-2023.

There will be no mixing and matching of the single-motor and current NCA chemistry battery pack. Every van with the single Rivian-built electric motor will be powered by the battery pack with LFP chemistry.

None of the three vans currently in production or set for future production will have four-wheel drive or all-wheel drive. No motors are planned for the rear axle, per Woodmore. This is due to it being easier for driving in snow and ice if the front axle is driven rather than the rear.

The best way to describe the EDV’s range is “it’s complicated.”

Currently the EDV700 has 201 miles of range by the EPA cycle, but Rivian chooses to restrict the state of charge, and software locks the vans to 150 miles of range. Why? Amazon’s request. That’s all the range Amazon feels its drivers need.

When the single-motor EDVs come online in Q1 2023 the LFP battery packs will be smaller 100-kw packs. Those vans will have a true 150 miles of range.

The charge port is located on the front driver side like the R1T and R1S, but it features a non-motorized door. The charging hardware, software, and charge curve is the same as what’s found in its truck and SUV cousins. The EDV is capable of AC and DC fast-charging, although the charge rates are slightly reduced from the consumer applications because of the use case, according to Woodmore.

The R1T and R1S are currently capable of recharging at a rate of over 200 kw, but Woodmore said Rivian hasn’t stress-tested the EDV’s system to the 200-kw rate. Rivian has said in the future with OTA updates and system refinements the truck and SUV should get closer to the 300-kw charge rate mark, but Woodmore said that’s not on the EDV’s roadmap at this time. 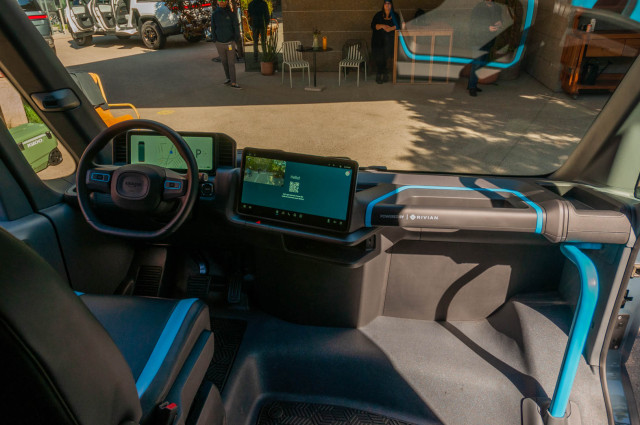 There are two levels of software in the EDV.

There’s an Amazon delivery app on the driver’s phone. When the driver comes to the EDV they’ll scan a QR code and that will pair their device, which contains their route, to the vehicle. At that point a handoff takes place and the driver then uses the van’s interface. To make the system work the driver will need both the phone with the Amazon driver app and the van.

Today the driver just needs the phone while driving other vans, but that’s a small screen. The EDV’s handoff from the phone to the main screen—which is the same 15.6-inch touchscreen found in the R1T and R1S and is angled towards the driver in the EDV application—should make it safer for the driver with the larger display. The turn-by-turn directions are mirrored onto the digital gauge cluster, which is the same 12.3-inch cluster found in the R1T and R1S.

Once a driver arrives at the delivery stop they can push a digital button on the touchscreen that says “I’m here” and the delivery address and name of the person getting the parcel expands across the entire 15.6-inch screen so the driver can see it from the back of the van while looking at the packages. 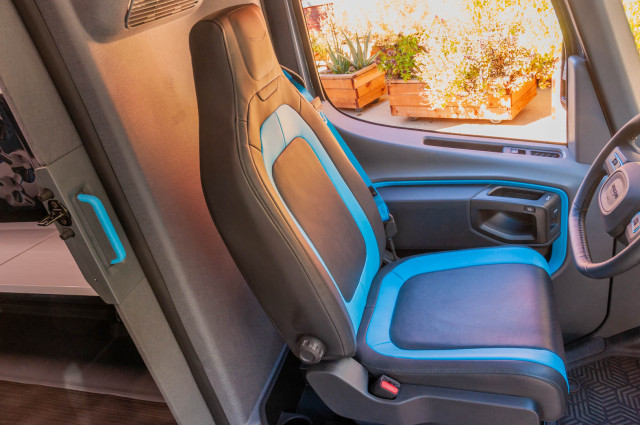 Designed by and for Amazon

Each van has a driver seat along with a passenger-side jump seat. The jump seat is there for training purposes or when a van has really high loads and needs two drivers.

Each van features a USB-A and USB-C charge port to keep the smartphone charged, a shelf mounted beneath the touchscreen for gloves, hats, and/or the smartphone, and a bevy of grab handles to make getting in and out of the van easier for the driver. There are two large cupholders to the left of the digital gauge cluster, and a storage cubby and more cupholders behind the driver’s seat.

One of the coolest functions is an automatic power sliding door between the cab and the cargo area that automatically opens and closes when the van is put in park and or drive. It acts as a barricade so packages can’t fly into the cab, but also saves time by automatically opening and closing. Seconds matter when delivering packages all day.

Automatic emergency braking comes standard as does a driver attention monitoring system. There’s a camera system (mostly shared with the R1T but in a different location with a different housing) mounted on the driver-side A-pillar. It watches the driver’s eyes to ensure they are paying attention to the road ahead. 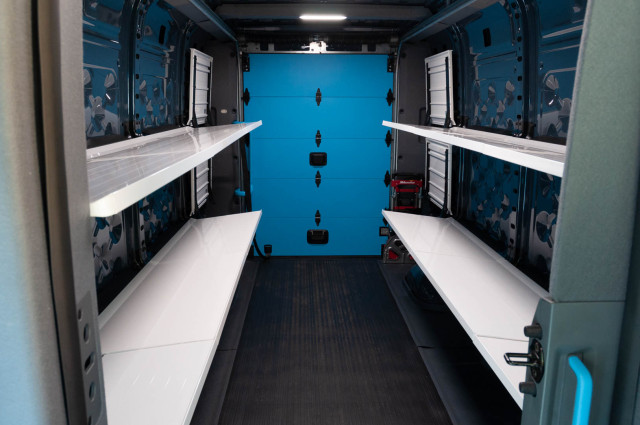 In the cargo space the shelves were designed specifically for Amazon to their specs, and they fold up to accommodate taller packages. The dimensions match Amazon’s package totes, and the floor’s rubberized. Amazon even gave their chosen package dollie, which is made by Milwaukee, to Rivian and asked them to ensure there’s specific onboard storage built-in for the dollie. There is, on the driver side in the back of the cargo area.

Outside the front is simple and Amazon-branded, though it could be branded for any company. The two circular LED lights are happy looking and make the van look friendly. The rear has an LED taillight strip that runs two-thirds of the van’s rear outline, including over the top of the cargo door, giving off a futuristic look.

Outside the Amazon-sphere; Rivian puts Benz on hold

To date Rivian has only delivered EDVs to Amazon. Woodmore confirmed the automaker will sell the EDVs to other companies, stopping short of talking about volumes, timelines, and customers.

In September Rivian and Mercedes-Benz announced a partnership that would make electric vans together for Europe. That deal with Mercedes was put on hold in December. Rivan said the pause went into effect so it could focus on existing van and consumer vehicles, though the partnership could be explored in the future.

Rivian isn’t talking about how much the EDV costs in any form, publicly, yet.

Ford’s taken quite the opposite tack—a value- and pricing-focused approach with a smaller battery pack, in a design that matches up perfectly with existing upfits for the gasoline Transit. Mercedes-Benz went the opposite direction and has focused on efficiency and range.

Distressed jeans have become a wardrobe staple for those curating a relaxed but chic aesthetic.

The argan oil used for beauty is different from the one used for cooking, so be sure you know whether you’re buying cosmetic or culinary argan oil.

Why Pittsburgh will (probably) never host a Super …

Homeless shelters set up during the cold

Man arrested in connection to drug trafficking in …

Number of babies named ‘Dutton’ increases by over …

How a Bridgeport woman got on Maybelline makeup ads

How a Bridgeport woman got on Maybelline makeup ads

Why Pittsburgh will (probably) never host a Super …