Mrs. Maryam Rajavi to U.S. Congress: Time to Stand with the People of Iran and Their Desire for Democratic Change 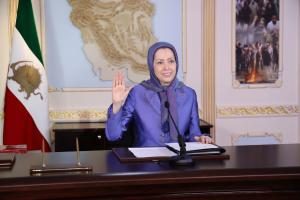 Maryam Rajavi, the President-elect of the National Council of Resistance of Iran addresses the October 21, 2022 virtual event by Bi-partisan Members of U.S. Congress in support of Iran uprisings.

Maryam Rajavi, the President-elect of the National Council of Resistance of Iran addresses the October 21, 2022 virtual event by Bi-partisan Members of U.S. Congress in support of Iran uprisings. 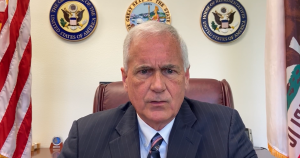 Congressman Tom McClintock (R-CA), lead sponsor of H.Res. 118 addressing the October 21, 2022 congressional event in support of the uprising in Iran. 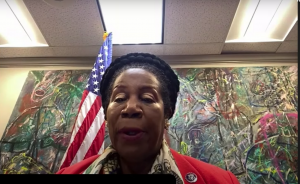 The uprising could not have continued without having some kind of organization or structure and the continuous activities of the Resistance Units on the ground.

It is time for western governments to stand with the people of Iran and their desire for democratic change”
— Mrs. Maryam Rajavi, President-elect, National Council of Resistance of Iran

WASHINGTON DC, USA, October 24, 2022 /EINPresswire.com/ -- On Friday, October 21, 2022, during a virtual congressional briefing in support of the ongoing uprising in Iran, over 30 bi-partisan members of the United States Congress addressed the event to express support for the Iranian people's continued protests for a free Iran.

For more than a month, the streets of Iran have been the site of unprecedented confrontation between the repressive forces of Iran’s clerical regime and pro-democracy protesters who are seeking to overthrow the medieval religious theocracy. The protests has now affected over 190 cities in all 31 provinces of Iran.

In the last 2 sessions of U.S. Congress, a number of House and Senate resolutions have highlighted and encouraged the Iranian people’s right to resist oppression and seek freedom. In the current 117th Congress, H.Res.118 with 257 bipartisan cosponsors explicitly expresses, “support for the Iranian people’s desire for a democratic, secular, and nonnuclear Republic of Iran.” This resolution also noted "support for the opposition leader Mrs. Maryam Rajavi’s 10-point plan for the future of Iran, which calls for the universal right to vote, free elections, and a market economy, and advocates gender, religious, and ethnic equality, a foreign policy based on peaceful coexistence, and a nonnuclear Iran."

Maryam Rajavi, the President-elect of the National Council of Resistance of Iran, opened this virtual event, sponsored by the Organization of Iranian American Communities, with her remarks, followed by Congresswomen Sheila Jackson-Lee (D-TX) and other bi-partisan members of U.S. Congress.

I am happy to have the opportunity to talk to you in this sensitive situation. First, I would like to thank the honorable members of Congress for your support for the uprising and the Iranian people’s Resistance for freedom.

The majority of Congress adopted the House Resolution 118. The resolution condemned the mullahs’ regime and declared support for the Iranian people’s struggle for freedom, indicating the fact that the American people and their representatives stand with the people of Iran.

Today, I would like to address five issues:
• FIRST, THE MAIN GOAL OF THE NATIONWIDE UPRISING IN IRAM
• SECOND, THE ROLE OF WOMEN IN UPRSING
• THIRD, THE FACT THAT PROTESTS ARE ORGANIZED
• FOURTH, THE PROSPECTS
• AND FIFTH, THE ROLE OF INTERNATIONAL COMMUNITY

FIRST, THE NATIONWIDE UPRISING:
The nationwide protests in Iran have continued for five weeks and expanded to 194 cities, despite brutal suppression.
The people’s main demand is best reflected in their chants in the streets. Death to the dictator and Death to Khamenei.
They want the regime’s overthrow in its entirety.

People in the streets have clearly declared their opposition to all forms of dictatorship by their chants of “Death to the oppressor, be it the shah or Khamenei.”

In five weeks, despite the murder of more than 400 protesters, the arrest of over 20 thousand, and the killing of at least 30 to 40 innocent prisoners in the Evin Prison for supporting the people’s uprising, the regime has not been able to stop the protests.

The wall of fear in society has cracked.

THE SECOND TOPIC CONCERNS WOMEN'S ROLE:
Women play a leading role in the present uprising.
Women’s courage and leadership role did not emerge overnight, but they are rooted in the Iranian women’s 40-year struggle against this regime.

Tens of thousands of women sacrificed their lives or were torture because of their ties to the MEK and opposition to the misogynous regime including in the massacre of 1988.

The mullahs’ regime has deprived women of their most essential and fundamental rights, including the freedom to choose their clothes.

Women do not demand anything from the regime. Their main demand is regime change.
They know they need to overthrow the fundamentalist regime to achieve their rights.
The murder of an innocent young woman, Mahsa Amini, shocked the world.
Since then, many more young women have been killed.

THE THIRD TOPIC CONCERNS THE FACT THAT THE UPRISING IS ORGANIZED:
Today’s protests in Iran are not without background and backing.

Rather, they are rooted in the regime’s failure to respond to the most fundamental needs of the Iranian people.
These protests have roots in four decades of resistance against political and social suppression and the mullahs’ economic crisis.

They rely on sacrifices by those who fought the regime.
An organized resistance has led this struggle.
The uprising could not have continued without having some kind of organization or structure and the continuous activities of the Resistance Units on the ground.¨

One of the special characters of the uprising is active participation of university and high school students, both boys and girls.

The Iranian regime officials have time and again acknowledged the leadership role of the Resistance Units and made threats against them.

FOURTH, THE PROSPECT FOR CHANGE:
Iran is on the brink of a major change.
Although the regime might resort to even more violence, but the developments of the past five weeks, and particularly the fighting spirit of the young generation, the existence of Resistance Units across the country, and people’s support for them show that we have entered a new phase.

The clerical regime is much weaker than any other time.

There is increasing tensions within the security forces’ ranks.

This is why the mullahs need to mostly rely on the IRGC to preserve their regime.

The prospect for regime change in Iran is within reach more than any other time.

According to the platform of the National Council of Resistance, as the regime’s alternative, power must be transferred to the people during a very brief transitional period by holding a free election.

THE FIFTH TOPIC CONCERNS THE DUTIES OF THE INTERNATIONAL COMMUNITY:
The time has come for a new policy on the mullahs’ regime.

It is time for western governments to realize that Iran is on the brink of change.
It is time for them to stand with the people of Iran and their desire for democratic change.

A democratic republic based on people’s votes, gender equality, and separation of religion state and a non-nuclear Iran.

The Iranian people are every day at risk of attacks, killings, and arrests. They want to overthrow the religious fascism.

The world must recognize the Iranian people’s right to self-defense in the face of brutal suppression.
A practical step would be to make sure that the people of Iran have free access to the internet.
The Iranian people’ democratic revolution will succeed.

The Iranian people and Resistance will always remember their friends in difficult times.

Representative Sheila Jackson Lee opened her remarks by saying "What an honor and privilege to be with you today on this momentous occasion and the opportunity to listen to our beloved and courageous freedom fighter Madam Rajavi." She added, "Madam Rajavi is correct on the act and the words: Iran is on the brink of freedom, that women have been at the forefront, but she has been leading."

Congresswoman Jackson Lee reminded everyone of the ultimate price of freedom, "In the summer of 1988, when 30,000 political prisoners were massacred by the Ayatollah’s regime, there were thousands of women among them." The second highest ranking Democrat on the House Homeland Security Committee said, "we know that Mrs. Rajavi took over the leadership of the movement in 1989. She paved the way for a generation of women to take up the most senior positions of political leadership."

Congresswoman Jackson-Lee congratulate the Iranian women for leading the Resistance and added, "I want to thank Mrs. Rajavi, who has offered a 10-point plan for the future of Iran noted in H.Res.118 that I'm a proud cosponsor."
She added, "I applaud the leadership of women in the ranks of Iranian resistance, as well as the visible participation and sacrifice in Resistance Units across Iran."

"We are grateful, Madam Rajavi, for your leadership and I am grateful to stand with you, as we have done over the years, more than a decade, fighting for that voice to be heard," Congresswoman Jackson-Lee said. She wished that Madam Rajavi's " 10-point plan may become a true reality and a reality of which leadership ascends with your guidance that leads a free Iran for generations to come."

Congressman Tom McClintock (R-CA), the sponsor of H.Res.118, in his address to the event said, "Our Declaration of Independence proclaims that whenever a government becomes destructive with the natural rights of its people, it becomes the right of the people to alter or to abolish it," adding, "the Iranian people deserve so much more than words of support. They also need action. I believe it’s time for the U.S. to step forward with material support for the freedom movement.”

Numerous other members of congress from both parties emphasized, their support for Iranians' quest to achieve freedom.