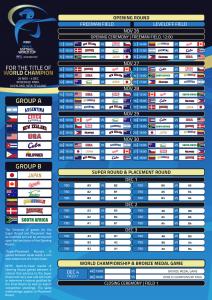 The XVII WBSC Men's Softball World Cup is set to open on Saturday in Auckland, New Zealand with six games to be played on Day 1 at Rosedale Park.

AUCKLAND, NEW ZEALAND, November 26, 2022 /EINPresswire.com/ -- The XVII WBSC Men's Softball World Cup is set to open on Saturday with six games to be played on Day 1 at Rosedale Park.

The press conference for the tournament took place on Friday, on the eve of Saturday's start to the tournament. “After the disappointing defeat in the Prague final where we finished in second place, everyone was crying,” Japan head coach Hiroshi Yoshimura said. “It was a heart breaking loss for everyone. Since then, we’ve been working to win, so we’re going to do our best to lift the cup this time.”

“We’re a bit out of season, we play in Canada until August, so that’s always a challenge for us,” said John Stuart, Canada’s head coach. “Our preparation started the first week of September as a team, a lot of communication via Zoom, phone calls, and training program just making sure the guys are prepared.”

“Our goal, the same as all the teams that are here, is to win the title. Then, let’s see what happens, but we’re here to win the championship. Every team here is ready, we all want to win,” said Venezuela’s Luis Russo.

Check all the head coaches' quotes and team profiles here.

A total of 50 games will be played in nine days and all of them will be available to watch around the world.

In the New Zealand territory, indigenous broadcaster Whakaata Māori will livestream all games of the tournament on its digital platform MĀORI+, with all the games of New Zealand Black Sox broadcasted live on free-to-air television. Whakaata Māori (formerly known as Māori Television) is the official broadcaster of the XVII WBSC Men’s Softball World Cup.

Fans in the rest of the world will be able to watch the 50 games of the XVII WBSC Men’s Softball World Cup through WBSC's exclusive online video platform, GameTime. Visit gametime.sport for the broadcast schedule and information on the available packages and bundles (geo-blocking restrictions may apply).