ARTIST PRITIKA CHOWDHRY IS SHOWING AT THE WEISMAN ART MUSEUM 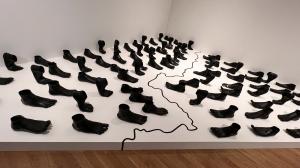 Artist Pritika Chowdhry's Silent Waters at "Ebb/Flow", an exhibition on view at the Weisman Museum of Art, Minneapolis, MN 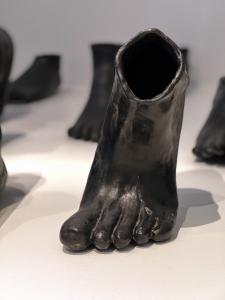 Close-up of one of the ceramic feet in Silent Waters, by artist Pritika Chowdhry 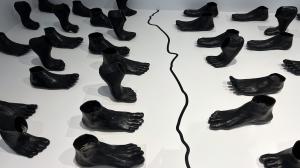 Installation view of 101 larger-than-life-scale ceramic feet arranged on either side of the border at “Ebb/Flow,” an exhibition on view at the Weisman Art Museum, Minneapolis 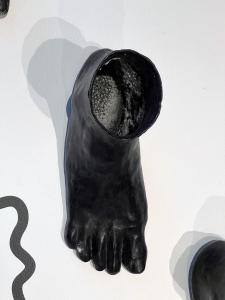 Close-up of the ceramic feet with water and salt, Silent Waters, by Artist Pritika Chowdhry 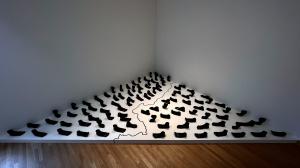 Pritika Chowdhry’s large-scale installation, “Silent Waters: The Uncounted,” is being presented in the “Ebb/Flow” exhibition at the Weisman Art Museum.

Pritika Chowdhry’s large-scale installation, “Silent Waters: The Uncounted,” presents dozens of ceramic feet, severed above the ankle, trodding toward each other but remaining eternally separated by the jagged line that divides the space. The state of separation is a reference to the division of a country whose peoples were once united. The line is a reference to the Radcliffe line which split Chowdhry’s homeland of India and became the new western border with Pakistan in 1947, causing the displacement of millions of Indians, including Chowdhry’s ancestors.

“Ebb/Flow,” the exhibition, was inspired by the definition of “ebb and flow” as a recurrent or rhythmical pattern of coming and going, or decline and regrowth. With multiple meanings, ebbing and flowing also describes the often fierce dynamism and unpredictability of natural and emotional reality.

The exhibition is unique in bringing together the historical and contemporary perspectives of three artists whose lineage has been profoundly impacted by the destructive legacies of colonialism. Chowdhry’s piece poetically contemplates the upheaval and human toll of the 1947 Partition of India. Dean reflects on the manual and psychological labor of enslaved and free African Americans. Leonard responds to the changed environments and indigenous lifeways brought on by outside occupation and settlement.

Pritika Chowdhry’s large-scale, ceramic-based installation work, “Silent Waters: The Uncounted,” previously shown in 2009 at the Weisman Museum of Art, Minneapolis, is presented in a new format for this exhibition on a raised platform. Two 16’ high diagonal walls provide a static boundary that encapsulates the triangular space wherein the installation lies. One hundred and one large-scale ceramic feet are arranged on either side of the border facing each other. The Radcliffe line meanders through the center.

The installation is accompanied by a minimalist background soundscape that echoes the sounds of falling rain, running feet, and a human body hitting a body of water. With the pervasive sounds, Chowdhry physically brings the viewer into the installation, helping viewers be present with this difficult history. By placing the three works in the same context with the two pieces by Dean and Leonard, the dialog with the shared colonial histories of the African American and the Native American is unmistakable.

Crossing boundaries of traditional studio ceramics, sculpture, and conceptual and political art, the “Ebb/Flow,” multimedia installation deepens access to and interrogates sites of historical and cultural upheaval. In addition, it adds to the material and subject diversity of the Weisman’s notable ceramics and American art collections. As such, the Weisman proudly presents this work to evoke reflection on and discussion of some of the most important and resounding issues of our time.


Historical Perspective
Chowdhry’s installation references the frenzied migration that followed the Partition of India in 1947. Muslims rushed to the newly created Pakistan and Hindus rushed to the Hindu-majority India, resulting in the biggest ever migration in history, with 20 million people crossing the new border. The stampede also triggered the worst communal riots in the history of the South Asian subcontinent resulting in over 2 million deaths. Lesser known is the incidence of about 300,000 cases of abductions and rape of Muslim, Sikh, Bengali, and Hindu women.

“Ebb/Flow” at the Weisman Art Museum relates to Chowdhry’s solo retrospective, at the South Asia Institute titled Unbearable Memories, Unspeakable Histories: Partition Anti-Memorial Project (August 6 to December 10, 2022). The exhibition’s title reflects the painful and silenced narratives that have been omitted from mainstream discourses of the 1947 Partition of India. Both the Weisman and the South Asia Institute exhibitions commemorate the 75th anniversary of the Partition of India and Pakistan.

The Partition Anti-Memorial Project, founded on the 60th anniversary of the Partition in 2007, is Chowdhry’s ongoing research-based project that excavates subjugated knowledge about the 1947 Partition of India and the 1971 Bangladesh Liberation War to build several experiential art installations that are temporary anti-memorials to the Partition.

The Partition has been described by acclaimed Pakistani-American historian Ayesha Jalal as “the central historical event in twentieth-century South Asia.” In her words, “A defining moment that has neither beginning nor end, partition continues to influence how the peoples and states of postcolonial South Asia envisage their past, present and future.”

Over the last fifteen years, Pritika Chowdhry has created ten bodies of work that address and examine the many facets of the Partition of India from a counter-memory perspective. Her anti-memorials create alternate ways to remember and memorialize traumatic geopolitical events, from the dual lenses of South Asian diasporic post-memory. Evoking corporeal bodies through a myriad of materials, her works highlight generational resilience and resistance.

“Through quiet but searing installations, artist Pritika Chowdhry reckons with violence that ripples through generations: mass displacement, rape and riots tracing back to the snaking borders that split a nation. For 15 years, she has made artworks based on the partition of British India into an independent India and Pakistan in 1947, as well as the bloody nationalist conflict that followed in East Pakistan, which cleaved off to become Bangladesh in 1971.” writes Jacqui Palumbo, senior writer at CNN.


About the Artist
Pritika Chowdhry is a feminist and post-colonial artist, curator, and writer whose work is in both public and private collections. Through large-scale sculptures and site-sensitive installations that reference the body, her work memorializes unbearable memories. Having witnessed the intergenerational effects of geopolitical trauma, Chowdhry has dedicated her artistic practice to responding to the violence of colonialism/imperialism alongside global acts of resistance.

Through her anti-memorials, Chowdhry aims to highlight historically marginalized female voices in the representation of Partition while contextualizing the event’s global repercussions. Transnational in scope, her sculptural art installations and anti-memorials bear witness to partitions of countries, civil and military wars, riots, border violence, genocides, and terrorist attacks, holding space for mourning, remembrance, and repair. ​