CLARKSBURG, W.Va. (WBOY) — At 4:30 a.m. on Oct. 22, veterans arrived at the North Central West Virginia Airport to start a day many would never forget.

Ever since 2005, the Honor Flight Network has been flying America’s veterans to Washington, D.C. The Honor Flight’s purpose is to help take veterans to the monuments and memorials built in their honor that they have never seen or been to before, at no cost to the veterans themselves.

It was the first Clarksburg flight since 2018, due to the pandemic.

Dan Johnson, the assistant hub director for Honor Flight Huntington, said, “We’re super excited. It has been a long time coming; we had to cancel in 2020 and this was actually supposed to go in June of 2020, so we are excited to get it off the ground.”

“We signed up for this approximately 4 years ago and we forgotten about it, Sunday a couple weeks ago we got a call and I was really surprised and pleased,” Waine Nicholson, a U.S. Navy, Vietnam veteran, said.

The flight welcomed 88 veterans: four from World War II, three from the Korean War, and 81 from Vietnam. Each veteran was paired up with a guardian to help the veterans know they are not alone.

“Excited to be with a whole bunch of Veterans and go through all the various monuments and things. I think it’s going to be a great day. I’m just lucky to be here,” Harold Crist, a U.S. Navy, WWII Veteran, said.

“I’m kinda happy that I get to go on it, well I probably wouldn’t have got to go if it hadn’t been for my buddy, he’s the one who pushed me into it,” said Joseph Corriveau, a U.S. Navy, WWII veteran.

“This is going to be an awesome day I can tell you that right now, I haven’t slept for a couple days, I’m just too excited about going,” Charles “Bub” Hardman, a U.S. Army veteran, said.

The Clarksburg flight of the Huntington Honor Flight took a year to prepare for and cost more than $100,000, made possible with the help of several fundraisers, volunteers and donors.

Upon arrival at Baltimore International Airport, firetrucks rendered a water cannon salute to welcome the veterans home. After a quick ride on the bus, they were greeted with friendly signs and handshakes, thanking them for their service.

Their first stop was the WWII memorial, which honors the 16 million who served in the United States Armed Forces, and the more than 400,000 who gave their lives to give us the freedom we have today.

“I didn’t think it was this big. I knew when they built it that I said one of these days I’d get to see it,” Joseph Corriveau, WWII, U.S. Navy, said.

Many had stories like Bob Skidmore, who experienced loss while serving aboard the destroyer DD-734 USS Purdy in WWII’s Pacific theater.

“It’s kinda heartbreaking to look at all this stuff and see what happened to some of the boys that won’t be coming back, my two brothers that were in are gone. I’m the only one left,” Skidmore said.

Next was the Air Force memorial, where the veterans were once again greeted with a warm reception. Seven Honor Flights were there in Washington D.C.

While at the Air Force monument, some took group pictures to remember.

“Getting to see the WW2, then getting to see all the rest of these, especially when we go get to see the wall and stuff like that, it’s all very important. The young generation needs to remember it,” Larry Zirkle, a Vietnam, U.S. Air Force veteran, said.

Elkins has a new tool for accessing meeting information

Elkins has a new tool for accessing meeting information

Flags to fly at half-staff in remembrance of Pearl …

Nonprofits given awards to support women in NCWV

West Virginia budget surplus grows: What to do with …

What Bob Huggins was told about Wren Baker

Flags to fly at half-staff in remembrance of Pearl …

Nonprofits given awards to support women in NCWV

Emergency road closure in Taylor County due to rockslide 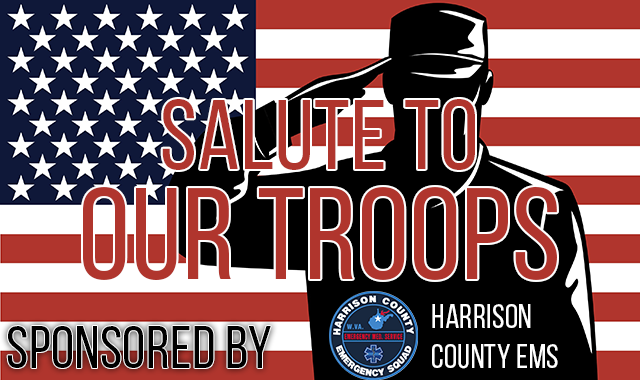 Best gifts for every grandpa

What Bob Huggins was told about Wren Baker

Emergency road closure in Taylor County due to rockslide

Man who allegedly fired gun at bar guilty of federal …